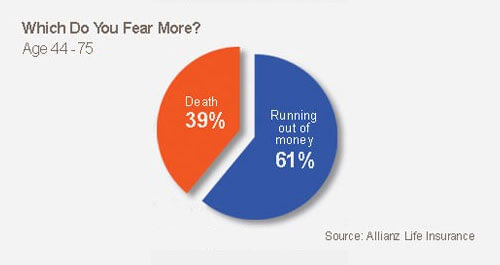 Americans fear outliving their income more than they fear death… Have You Been Putting Off a Retirement Evaluation? The Truth will Empower You.

So if we’re so afraid, why don’t we do anything about it? It all comes down to this, and we’re all guilty of it…we deliberately avoid something we expect to bring bad news. Perhaps you’ve avoided going to the doctor with something that bothers you because you’re afraid that it’s a symptom of something more serious. Maybe you’ve put off having a serious talk with someone because you don’t want to know how they really feel.  Or perhaps, like so many soon to be retirees, you’ve put off doing a comprehensive retirement evaluation for fear that the outcome won’t be so optimistic.

There’s quite a large body of research on the tendency to avoid bad news, which researchers call information avoidance, suggesting that we’re extremely adept at this whole “avoiding assumably bad news” thing.

Studies have shown people tend to avoid all kinds of information, even when doing so might ultimately be harmful. People frequently avoid medical information/attention, even when knowing that treatment could be helpful. After making a decision, many people tend to be biased towards information that confirms that decision. “We avoid anything that might challenge what we already believe: a large review of research on ‘selective exposure’ showed that people are almost two times more likely to choose to read information that fits with what they already believe than information that might challenge their beliefs or fears. Realizing that something you believe in is wrong doesn’t feel good. Changing our minds also takes efforts…it’s much easier to just stick with what we already believe,” according to James Shepperd, psychology professor at the University of Florida.

Shepperd adds other reasons including, “It might suggest that  we do something we don’t want to. Learning that your toothache requires a root canal is a hassle and expensive, not to mention painful.”

Discovering that all your previous investment strategies are no longer appropriate as you reach retirement will require time and energy to rectify, possibly finding a new advisor and making seemingly new and risky decisions. Staying in a state of uncertainty or status quo, in many cases, seems much more appealing.

And finally, Shepperd says, “It might make us feel bad. We might simply avoid information that could upset us. Stepping on the scales and realizing you’ve put on a few pounds probably won’t make you feel that good.”  Certainly, finding out that you haven’t saved enough for retirement won’t make you feel good, but knowledge is power. Read on to see why knowing the truth is (mostly) better.

Why it’s (mostly) better to know the truth

It does make sense that we would avoid information for all these reasons. After all, what’s that famous expression?  Ignorance is bliss. Who wants to hear they might run out a money in retirement? Who wants to hear a less than favorable medical diagnosis?  Maybe it’s easier (and better) to be ignorant?

But truth is, it’s actually better to know the truth. Avoidance of information is short term thinking. In the long term, it usually comes back to bite you. Most things that are festering, if avoided, get worse over time. Finding out that your retirement stash won’t be enough, although immediately unpleasant, means you can do something NOW to fix the issues…and be much better off in the end. Oftentimes, you also find silver linings. For instance, you talk with a retirement specialist and find out that with the proper Social Security filing, you’ll get $500 more per month in benefits. Had you not addressed your original issue, you wouldn’t have discovered this little pot of gold.

Most of the time we’re better off if our beliefs match up to reality—because then we’re in a position to actually change things: like getting the medical attention we need, seeing a lawyer about your estate plan, or doing a thorough retirement evaluation. And finally, knowledge is power. Once you have that feeling of power, fear tends to dissipate and so will avoidance of information in other aspects of your life.

And certainly there are times when it’s better not to know…typically when there’s genuinely nothing you can do to change a situation or when the truth won’t make your life any better.

Getting the courage to change

Telling one to accept fear and stop avoiding information is easier said than done. How can you start stepping on the scale? Making that physical appointment? Meeting with a retirement advisor to check on your nest egg?

Professor Shepperd and colleagues have been trying to answer just this question. They found that in one recent study, people were more willing to learn their risk of a certain disease if they first completed a “contemplation” exercise, in which they spent some time answering questions about the long-term consequences of finding out their risk. Shepperd suggests that this intervention helps reduce information avoidance by shifting people’s thinking from the automatic reaction, “But finding out I’m at high risk of a disease sounds horrible!” to reasoning more about the long-term consequences, “Overall it would be better to know, if it means I can reduce the risk.”

Similar to this, our affiliated Retirement Power Hours specialists offer a complimentary Retirement Review in which they spend time taking a look at what you have, reviewing your risks and potential retirement outcomes. They look at your current situation and propose any changes.  They do all this to help you know the truth and to help avoid the risk that you won’t have enough to last a lifetime in retirement.

We hope you remember this article the next time you’re faced with a situation you want to avoid. Take a moment to step back and contemplate the pros and cons of avoiding the situation. If you can do something about it, squelch your fears and seek the truth. You’ll be much better off in the long run. The truth is empowering.

Aldous Huxley summed it up quite nicely when he said, “Facts do not cease to exist because they are ignored.”

In part 2 of this 3 part series: Have You Been Putting Off a Retirement Evaluation?  The Truth will Empower You, we’ll go in depth on the value of retirement reviews.

Why Ken Fisher Is Wrong on Annuities: Milevsky, Finke

Part 2: Americans fear outliving their income more than they fear death… Have You Been Putting Off a Retirement Evaluation? The Truth will Empower You.